Abstract
Elastosis perforans serpiginosa (EPS) is a rare disorder showing erythematous or skin-colored hyperkeratotic papules with a serpiginous or arcuate distribution. There are various treatment modalities available, but a standard treatment method has not been established. We report the case of a 33-year-old male patient with a 2-month history of grouped, multiple, annular-shaped, scaly erythematous papules on his right anterior neck. A histopathological analysis revealed increased brightly eosinophilic elastic fibers from the papillary dermis through the epidermis and clutching the dermis at the site of the perforation of the elastic fibers. Immunohistochemical analysis revealed abnormal elastic fibers with transepidermal elimination in the papillary dermis on the elastic stain. Based on these features, the lesion was diagnosed as EPS. After treatment with six sessions of the 585-nm pulsed dye laser over 3 weeks, the lesion was cleared without any adverse events and no recurrence was observed 2 months after therapy.
Keywords: Dermoscopy; Elastosis perforans serpiginosa; Lasers

Elastosis perforans serpiginosa (EPS) is a rare disorder classified as a primary perforating dermatosis.1 EPS is characterized by hyperkeratotic, skin-colored or erythematous papules or plaques with a serpiginous or arcuate distribution usually occurring on the face, neck, ear, upper extremities, trunk, and lower extremities. The most prominent histopathologic finding is the presence of narrow transepidermal or perifollicular perforating canals that extend upward in a straight or corkscrew pattern from the dermis and contain a mixture of degenerated eosinophilic elastic fibers, basophilic debris, and inflammatory cells.1 The mechanism by which the elastic fibers are altered is not known.2

Herein, we report a therapeutic experience of EPS on the neck in a 33-year-old male using the PDL. A written informed consent was obtained from the patient for the publication of this case report.

A 33-year-old Korean male visited our clinic with erythematous hyperkeratotic papules coalescing into several plaques on his right anterior neck. These plaques first appeared 2 months ago and increased in number. The patient did not complain of any other symptoms. His previous medical history was not remarkable other than seasonal allergic rhinitis.

At another local clinic, microscopic potassium hydroxide preparation obtain form the lesion was performed and showed negative result. As a result, under the suspicions of eczema and tinea incognito, the patient was treated with short course of oral itraconazole, minocycline and prednisolone about a week but did not show any improvement. There was no other medication history.

Figure 1. (A) Grouped, multiple, annular-shaped, scaly erythematous papules on right anterior neck at the first visit and (B) polymorphous vasculatures on skin-colored and whitish patch with keratotic papules (yellow arrow) on dermoscopic examination. (C) Complete regression of the lesions 5 months after six sessions with minimal scar. 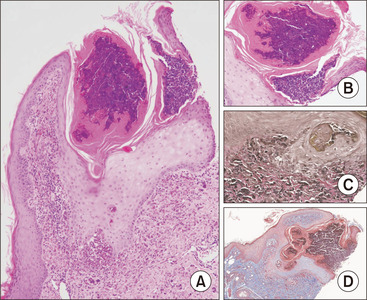 Figure 2. (A) Histopathologic examination revealed a focal hyperplastic epidermis that appears to clutch the dermis at the site of perforation of elastic fiber and basophilic mass (hematoxylin and eosin, ×100) and (B) the basophilic mass comprises degenerate epithelial cells, inflammatory debris (hematoxylin and eosin, ×200). (C) Elastic stain revealed abnormal elastic fibers in the upper dermis showing transepidermal elimination (×200) and (D) trichrome stain demonstrated that blue-staining collagen fibers were not involved (×40).

Considering cosmetically importance and anatomical characteristics of thin skin of neck, a treatment of the EPS using PDL was proposed rather than any other ablative or fractional lasers to prevent scar. Treatment using a 585-nm PDL (CynergyTM; Cynosure Inc., Westford, MA, USA) performed six sessions per three weeks after administration of topical anesthesia using lidocaine-prilocaine cream. The laser parameter used for the treatment was as follows: fluence 8.0 J/cm2, pulse duration 6 ms, spot size 7 mm, frequency 1.5 Hz. Clinical endpoint was immediate change of a transient gray color. Complete regression of the lesions 5 months after six sessions without scarring (Fig. 1C). No adverse events associated with laser therapy were noted. After laser treatment, maintenance therapy was done with 2 months of tretinoin cream 0.01% and 1 month of topical mometasone furoate 0.1% cream for every two days to prevent recurrence. No recurrence was observed for 2 months after therapy and is under continuous observation.

The pathophysiology of EPS is not well-established, it has been postulated that focal irritation in the dermis may induce formation of epidermal and follicular channels to extrude the irritating agent.7 Three forms of EPS have been recognized; idiopathic, reactive, and D-penicillamine induced type. Concerning the idiopathic type, few reports in the literature have described a familial occurrence.8 For reactive subtypes, the 62-kDa elastin receptor peptide, not expressed by normal cells but only by perilesional keratinocytes, thought to be allows the fibres to migrate along transepidermal channels. Moreover, immunoglobulin deposits were found in altered elastic fibres, supporting the hypothesis of an immune pathogenesis.8

With the vague pathophysiology, consensus of EPS treatment was not established with few evidence. Among several treatment modalities, laser therapy has proposed as a novel therapeutic modality. Several cases were previously reported using ablative erbium YAG,1 ablative CO2,2,9 ablative fractional CO210 and PDL2,11 in EPS treatment. As abnormal elastic tissue are being extended from dermis to epidermis through transepidermal channels, ablative lasers may be too superficial to remove entire pathological elastic tissue or too deep with possibility of making scar. Previously, several cases using the PDL in treatment of EPS were reported with almost clear or clear lesion and without any adverse effect. Table 1 summarized previously reported EPS patient treated with the PDL. The patient showed marked improvement within 2-8 treatment session and did not recur during follow-up period.

The mechanism of action of the PDL in the treatment of EPS is not exactly known. PDL is based on the principle of selective photothermolysis, provide permanent thermal damage with the surrounding tissue held intact. The target chromophore of 585-nm PDL is oxyhemoglobin. PDL with 585-nm penetrates about 1.2 mm and the pulse duration we used was 6 ms. As the thermal relaxation time is 140 μsec in capillaries with a diameter of 20 μm and 3,600 μsec capillaries with a diameter of 100 μm, 585-nm PDL is effective in the treatment of small to medium-sized vessels. As polymorphous microvascular structure was observed on dermoscopy, the PDL might be effective in treatment of our patient. The assumed effect is a specific absorption of light in the blood vessels of the superficial dermis, resulting in release of inflammatory mediators into the interstitium followed by stimulated fibroblast activity.12 Also, PDL can be used as a safe and effective treatment modality for inflammatory skin diseases such as localized plaque psoriasis and acne vulgaris.13 These findings suggest that PDL may have anti-inflammatory properties. These previous studies support the hypothesis that PDL has anti-inflammatory properties and ameliorates the vascular consequences of inflammatory response of EPS.

Alternatively, the laser may function in a nonspecific fashion similar to cryosurgery, causing a quicker elimination of the abnormal elastic fibers.11 In the same context, the PDL appears to be effective treatment for striae distensae and sun-damaged skin.14,15 Zelickson et al.15 reported that histologic examinations of straie distensae lesion revealed replacement of abnormal elastic tissue to a superficial dermal band of well-organized elastin and collagen fibers after treated with the PDL. Besides, Nehal et al.14 had noticed only mild subjective improvement in texture of mature striae distensae with the use of PDL, however, it failed to show the same pathologic changes. Although the PDL improve clinical aspects of EPS, it shows conflicting in histopathological study and the understanding of exact mechanism is insufficient.

In order to make better treatment decisions such as laser parameter or treatment duration, a better understanding of EPS at molecular and cellular level is needed to elucidate of the treatment mechanism.