Abstract
Compression stockings are commonly used for the prophylaxis of venous thromboembolism during prolonged surgeries; however, the associated potential adverse effects are not well known. A case of the successful treatment of a 48-year-old female with a postoperative scar caused by compression stockings used during breast reconstruction using an abdominal flap has been presented. The patient complained of right leg pain and multiple blisters after surgery. The stocking was wrinkled around the popliteal area of the right leg and was immediately removed. Most of her wounds eventually epithelialized, but the medial popliteal wound became necrotic. An erythematous firm scar and dyschromia developed. A combined treatment using a pulsed dye laser, fractional non-ablative erbium:glass, and CO2 laser was initiated early at four weeks after surgery. After three monthly sessions, improvement of the scar and dyschromia was achieved. We, therefore, believe that early initiation of combined treatment could have a positive effect on postoperative scars caused by compression stockings.
Keywords: Scar; Compression stockings; Breast neoplasms; Free tissue flaps

A severe skin injury can cause an abnormal wound healing process resulting in hypertrophic scars or keloid formation. These scars are undesirable to patients and detrimental to social reintegration because they can become contracted, red, raised, pruritic, and dyschromia with regions of hyperpigmentation and hypopigmentation. They are characterized by excessive collagen deposition resulting from dysregulation of the normal wound healing, and their treatment remains a clinical challenge.1

Lasers have been used to treat various types of scars. Fractional CO2 laser, which was first introduced in 2007, is gaining popularity due to the need for fewer treatment sessions as well as higher energy delivery and better outcomes.2 Several studies have reported that fractional CO2 lasers in hypertrophic scars and keloids are effective and safe for treatment,3 and even more so when combined with other lasers. In addition, fractional non-ablative lasers could be used as a new tool for the successful treatment of various scar types.4 The production of microscopic treatment zones sparing the epidermis, which allows for faster healing and reduces the severity of adverse effects, counts as an advantage of fractional non-ablative lasers.2 Recently, pulsed dye laser (PDL) has been used in studies to determine its effects on clinical symptoms, skin texture, elasticity, and pruritus of postoperative scars, based on vascular proliferation playing a key role in the creation of scars.5 Furthermore, the long-pulse 595-nm PDL is one of the most effective modalities for the treatment of vascular lesions, facial erythema, and telangiectasias.6 Several clinical studies also suggest that combined treatment using several laser modalities is superior to monotherapy7 and early treatment can significantly improve the erythema or dyschromia rather than waiting for the scars to mature.8

In this study, we present a case of effectively treated postoperative scar caused by compression stockings using an early combination of laser treatment with PDL, fractional non-ablative erbium (Er):glass, and CO2 lasers.

The study was approved by the Institutional Review Board of Dankook University hospital (IRB No. 2022-03-025) and performed in accordance with the principles of the Declaration of Helsinki. The patient provided written informed consent for the publication and the use of her images.

A 48-year-old female was diagnosed with ductal carcinoma in situ in the right breast. A right nipple-sparing mastectomy was performed, and reconstruction was completed using a standard abdominal flap in August 2021. The patient was positioned supine with knees in a slightly flexed position for the majority of the operation. From the time the abdominal closure began to the time the surgery was completed, the patient was in a semi-Fowler’s position with hip/knee flexion for approximately three hours. To avoid deep vein thrombosis, compression stockings were worn on both legs throughout the surgery; pneumatic intermittent calf-compression pumps were not employed. She had a peripheral intravenous line in her right foot and an arterial line in her left dorsalis pedis artery. The total surgical time was 11.5 hours.

In the recovery room, the patient complained of right leg pain and multiple blisters. The stocking was wrinkled around the popliteal area of the right leg and was immediately removed. Several fluid-filled blisters in the popliteal and calf areas were punctured and the underlying skin was kept clean to prevent infection and promote healing (Fig. 1A). Thereafter, antibiotic ointments were applied. Over time, pain in the right leg gradually lessened, and most of the wounds epithelialized. However, the medial popliteal wound became necrotic (Fig. 1B). Three weeks after surgery, the patient underwent surgical debridement and revision for the removal of necrotic tissue. After surgical debridement and revision, the wound healed without complication. However, the patient developed an erythematous firm scar and dyschromia on the right leg. 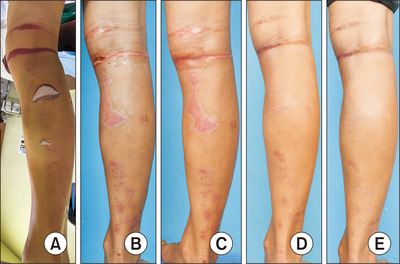 One day after the surgical revision (Fig. 1C), the treatment with PDL (Vbeam®; Candela Laser Corporation, Wayland, MA, USA) included one pass with the 10-mm handpiece to target the erythematous and dyschromic lesions in the right calf area using a fluence of 7.0 J/cm2 with a pulse duration of 1.5 ms. Four weeks after the surgical revision (Fig. 1D), an early combination of laser treatment was initiated for the erythematous firm scar on the popliteal area. Three laser machines were used, including a 595-nm PDL and the combination of a 1,550-nm fractional non-ablative Er:glass laser (Mosaic®; Lutronic Corporation, Seoul, Republic of Korea) and a 10,600-nm fractional CO2 laser (eCO2®; Lutronic Corporation), which allows the sequential emission of each wavelength. The 595-nm PDL was fired with 7.0 J/cm2 fluence and 7-mm spot size with a pulse duration of 1.5 ms. Fractional non-ablative Er:glass laser was used with a setup of 25 mJ using the dynamic operating mode. Immediately after non-ablative treatment, the fractional CO2 treatment was delivered to the lesions and surrounding skin at 100 mJ with a power of 25 W using dynamic operating mode. At the same time, the treatment with only PDL was performed in the right calf area. The treatments were delivered for three sessions with a monthly follow-up visit. After three monthly sessions, the erythematous firm scar on the popliteal area showed clinical improvement in pliability, vascularity, and volume of scar. In addition, erythema and dyschromic lesions on the right calf area were also improved without undesirable purpura (Fig. 1E).

Patients with breast cancer who choose to undergo breast reconstruction using abdominal flaps have several important risk factors for developing postoperative venous thromboembolism, including female sex, cancer diagnosis, prolonged operative time, and postoperative immobilization.9 Several methods have been proposed to prevent postoperative venous thromboembolism. One of these is the use of compression stockings. Graduated compression stockings, which are prescribed in most cases, are widely accepted, relatively easy to put on, and less cumbersome than bandages and pneumatic devices. The stockings exert the most compression at the ankle, with compression gradually decreasing upward. Gradual compression can reverse venous hypertension, strengthen the skeletal muscle pump, promote venous return, and improve lymphatic drainage.10 However, the incorrect use of compression stockings can be dangerous. Thigh-length stockings that are not properly fitted or rolled down to the lower leg can cause a tourniquet effect, reducing venous outflow and possibly injuring the skin. Injuries from compression stockings worn during abdominal flaps are extremely rare. In our case, the greatest compression of the folded stocking occurred in the popliteal area, which resulted in skin necrosis and blisters. In general, the pressure of a compression stocking is not the greatest in the popliteal area; therefore, the injury in our case likely occurred due to the compression stocking combined with the patient’s position.

The patient’s position in the operating room must be considered during prolonged surgery. In the case of free-flap breast reconstruction, the prolonged extension or pressure of nerves, muscles, and tendons is applied as a result of the semi-Fowler’s position, impairing capillary perfusion and increasing the risk of tissue and nerve injury. In addition, during surgery, the leg is elevated with the hip and knee flexed and the position is changed by sitting and tilting. These position changes can be stressful to the leg circulation and may cause the stockings to shift or fold, exerting unexpected pressure. Consequently, an erythematous firm scar and dyschromia developed on her right leg.

Recent advances in clinical research on scar treatment recommend the use of a combined approach rather than monotherapy. Several studies reported that the combination of the fractional non-ablative and ablative lasers provides an additive effect on reducing the epidermal damage and improving the scar texture,2 and may provide comparable cosmetic benefits while alleviating some of the more severe adverse effects associated with confluent ablative remodeling.11 Without damaging the epidermis, non-ablative fractionated lasers reach a depth of 300 to 400 mm in the dermis. Thus, undamaged dermal tissue heals the microscopic treatment zones quickly and promotes collagen remodeling.12 Since non-ablative fractionated lasers require numerous treatments to be effective, ablative fractional laser technology was created. Microscopic treatment zones of ablative fractional laser include the epidermis, which results in more severe damage with more side effects and a longer downtime than non-ablative. However, the effects of ablative fractional laser are stronger and more lasting.13 In addition to fractional non-ablative and ablative lasers, PDL with other laser modalities is effective for erythema, pain, scar volume, texture, pliability, and pruritis.5 In particular, the 595-nm wavelength of PDL is strongly absorbed by melanin, which has been shown to be effective for the treatment of vascular lesions and the improvement of telangiectases and pigment dyschromias.14

Recently, the concept of “the earlier the treatment, the better” has been suggested. Some studies evaluated the appropriate timing of laser treatment to reduce scarring and concluded that early fractional CO2 laser treatment four weeks after surgery is an effective and safe method to minimize scar formation.15 Herein, the administration of a combined treatment of PDL, fractional non-ablative Er:glass, and CO2 lasers four weeks after surgery for scars caused by compression stockings has been presented. We believe that the combined treatment of these three lasers could exert a positive effect on the erythematous firm scar and dyschromia.

In conclusion, it has been observed that prolonged surgeries involving changes in the patient’s position could lead to unexpected compression from shifted or folded stockings, which in turn could cause erythematous firm scar and dyschromia. Additionally, these unexpected severe scars could be managed through an early combined laser treatment using PDL, fractional non-ablative Er:glass, and CO2 lasers.