Abstract
Background and Objectives
Lasers are widely used for scar treatment because they are less invasive and safe. Fractional CO2 laser treatment has proved to be useful for scar treatment but is relatively less effective for depressed or hyperpigmented scars. On the other hand, the picosecond laser, a later development, is known to be more effective for such scars. The purpose of this study was to investigate the effect of combining the two laser treatment methods.
Materials and Methods
Twenty-seven patients who received the fractional ablative CO2 laser followed by 1,064-nm Nd:YAG picosecond laser with micro-lens array (MLA) treatments for post-traumatic facial scars were retrospectively evaluated. Photographs were taken before treatment and after the final procedure, and the scars were evaluated using the Vancouver Scar Scale (VSS).
Results
On average, patients were subjected to 4.37 fractional CO2 laser sessions and 3.67 picosecond laser sessions. The mean of the VSS score improved from 7 to 2. In addition, recovery of the depressed scars was also observed through clinical photo reviews. No complications were reported due to the procedure.
Conclusion
The additional application of a picosecond laser with MLA after fractional CO2 laser treatment can be a safe and effective way to further improve outcomes in patients with post-traumatic facial scars including pigmented or depressed scars. Although this study is limited to posttraumatic facial scars, we expect that the results of our study can be extended to scars due to various other causes in the future.
Keywords: Lasers; Picosecond laser; Cicatrix; Pigmentation; Depressed scar

Facial scars after trauma bother patients as it can cause both social and psychological stress. These post-traumatic scars are treated with a variety of ways including anti-inflammatory injection, compression, laser, radiation, and/or surgical treatment. Laser treatment is a relatively less invasive and safe way, and various types of lasers are used for scar treatment. The fractional CO2 laser is known to be helpful for facial scars, but it has some complications in that it could cause pain, erythema, or hyperpigmentation. It is thought to be related with mechanism of the fractional CO2 laser through ablation, necrosis, and coagulation processes in previous histological studies.1,2 Therefore, attempts have been made to replace fractional lasers by using picosecond laser for relatively fewer adverse effects. In previous studies, we also reported on the usefulness of treatment for depressed or pigmented scars through 1,064-nm Nd:YAG picosecond laser with micro-lens array (MLA).3,4 There are several studies comparing the two treatments, but there is no study that combined the two treatments.5 In this study, after several fractional CO2 laser treatment sessions, we tried to see if additional picosecond laser was effective on facial scars.

A retrospective study was conducted on 27 patients who received the fractional ablative CO2 laser followed by 1,064-nm Nd:YAG picosecond laser treatments for post-traumatic facial scars from July 2016 to December 2020. Through chart review, demographic data (sex, age, and scar location) and clinical information (Fitzpatrick skin type, laser parameters, cycles, and photographs) of patients were collected. All patients wrote informed consents for publication of patient’s images. This study complied with the protocols and regulations of Institutional Review Board (IRB) and was performed according to the criteria set by declaration of Helsinki.

Before treatment, patients were typed with Fitzpatrick classification, which classifies skin type I to VI, based on skin color and tendency to burn. This classification can help predicting the response of skin to aesthetic procedures including laser.6 All procedures including setting laser parameters are performed by a single, skilled plastic surgeon, considering the Fitzpatrick skin type and scar properties. Patients were applied 2.5% lidocaine topical anesthetic ointment on the scar area 1 hour before the procedure. First, the fractional CO2 Laser (LineXel; UTI Co. Ltd, Seoul, Republic of Korea) with a pulse duration 220-440 ms was performed. It was performed 3 to 11 times with an interval of at least 1 month. After that, the 1,064-nm picosecond Nd:YAG laser with MLA (PICOCARE®; WONTECH, Daejeon, Republic of Korea) was performed with spot size 3-7 mm, fluence 1.2-6.4 J, and frequency 1-10 Hz. It was also performed 2 to 15 times at least 1 month interval. After each procedure, patients were instructed to avoid direct sunlight and apply sunscreen to protect the scars.

Two plastic surgeons evaluated the photographs before treatment and after the final procedure. The scars were scored with the Vancouver Scar Scale (VSS), that assesses vascularity (0-3), pigmentation (0-2), pliability (0-5), and height (0-3).

SPSS version 24.0 (IBM Co., Armonk, NY, USA) was used for statistical analysis. The Wilcoxon signed-rank test was used to compare the results of the patients before and after treatment on the VSS, and statistically significant was considered to be -value < 0.05.

In total 27 patients with post-traumatic facial scars were treated with picosecond laser after fractional CO2 laser treatment. Among them, 23 (85.1%) were male and 4 (14.8%) were female, and the average age was 44 years (6-82). The location of the scars was most often on the forehead (33.3%), followed by the nose and cheeks. In Fitzpatrick skin type, type III was the most common with 12 (44.4%) followed by type IV and type II (Table 1). On average, 4.37 sessions of fractional CO2 laser and 3.67 sessions of picosecond laser were performed, and the average period until the completion of all treatments was 11.48 months (Table 2).

Table 1 . Demographic characteristics of the patients

The mean of the VSS score before the treatment was 7 (interquartile range [IQR] 6-8), and after the treatment, the mean score decreased to 2 (IQR 1-3) (Table 3, Fig. 1). Each sub-item of vascularity, pigmentation, pliability, and height showed statistically significant improvement when compared before and after the treatment. In addition, recovery of the depressed scar was also observed through clinical photo review (Figs. 2, 3). No complication was reported due to the procedure. 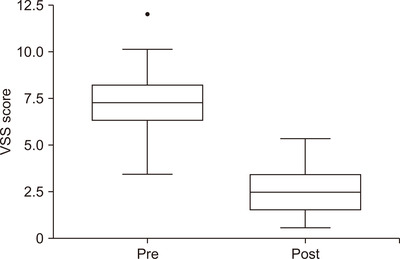 Figure 3. The mean of the Vancouver Scar Scale (VSS) was 7 (IQR 6-8) before the initial treatment, and 2 (IQR 1-3) after the final treatment. IQR, interquartile range.

Different types of lasers have been used for post-traumatic facial scars, depending on the shape and timing of the scar. Among them, the fractional ablative CO2 laser and the 1,064-nm Nd:YAG picosecond laser are being used for resurfacing.7 Ablative lasers create thermal damage to the epidermis and superficial dermis, promoting dermal remodeling and keratinocyte differentiation. This increases skin elasticity and lightens epidermal pigmentation through redistribution. In addition, controlled heating applied to the dermal layer removes the fragmented collagen matrix and induces new collagen formation, which improves scar remodeling. However, due to these mechanisms, there are many complications such as delay of recovery, erythema, scar, and post-inflammatory hyperpigmentation.8,9 Fractional photothermolysis is then developed to reduce the surface range of thermal damage creating a microscopic thermal zone, and spare the surrounding tissue to make safer and more effective treatment.10 Using these principle, fractional ablative lasers are commonly used for various scars and rejuvenation.11 It has been reported that early use of fractional CO2 laser 4 weeks after trauma promotes scar remodeling. But, it is inevitable to feel uncomfortable after the procedure and have a few days of downtime.3

The 1,064-nm Nd:YAG picosecond laser has been reported an effect in a similar way to subincision technique, which releases fibrous strand inside the scar tissue.12,13 It provides short pulse durations of 10-12 so that it can accurately targeting scars with over-photoacoustic effects and fewer photothermal effects.14 Also, because picosecond lasers cause more photomechanical damage than nanosecond lasers, they are more effective at degrading pigmented particles. For this reason, picosecond lasers were initially used for tattoos and pigmented areas.15-17 Additionally it can be used with diffractive optical element or MLA to increase fluence focally, while decrease in overall treatment energy density. The high influence of fractionated laser pulses causes the synthesis of collagen and elastin without surface ablation.18

Subsurface tissue ablation is accomplished by the mechanism called laser induced optical breakdown (LIOB). The multiple seeding via multiphoton ionization process creates a free electron plasma cloud, which absorbs the energy and ablates tissue within the cloud leaving a vacuole. By adjusting the wavelength, LIOB can be focused on desired depth, from epidermis to deep dermis.5 Fewer complications and effect on hyperpigmented scars have been reported due to these properties.19 Because of no downtime and few adverse effects, the picosecond laser is thought to replace the fractional ablative laser.14 Lee et al.20 reported that fractional 1,064-nm picosecond laser with diffractive optic element was effective on depression of wrinkle and acne scar. So we thought whether the picosecond laser would be effective in depressed scars.

Based on the characteristics of each laser techniques, we thought that the application of the 1,064-nm Nd:YAG picosecond laser would complement the fractional ablative CO2 laser. We first applied the fractional ablative CO2 laser to promote scar tissue softening and remodeling, and then applied the 1,064-nm Nd:YAG picosecond laser with MLA to further improve depression and pigmented area. The result showed a significant improvement in all details of the VSS.

This study has several limitations. First, as it is a retrospective study, the cycle, frequency, and period of laser treatment are not constant. Second, VSS was not evaluated before picosecond laser, so we do not know exactly how much effect picosecond lasers have on scar improvement. Third, since VSS did not reflect depression, the depressed scar was evaluated as 0 points like normal skin, so objective digitization could not proceed. However, clinical improvement of depressed scar was confirmed through photograph review, and pigmentation and pliability were also improved, so overall VSS score was improved.

In addition, it would be necessary to collect detailed data like histologic findings through more carefully designed studies and the superiority comparison with the results using only the picosecond laser or fractional CO2 laser should be further studied.

In conclusion, for post-traumatic facial scars, additional application of picosecond laser with MLA after fractional CO2 laser treatment can be a safe and effective way to expect further improvements including pigmented or depressed scars. Although this study is limited to post-traumatic facial scars, we expect that the results of our study can be extended to other scars due to various causes in the future.