Abstract
Bronchial foreign body aspiration (BFA) is a common but emergent condition in infants and children. Furthermore, it can result in various complications such as atelectasis, pneumonia, bronchiectasis, and pneumothorax. Among these, pneumothorax is a very rare complication. However, it can be fatal without the swift implementation of appropriate treatment. We experienced a case of 16-month-old girl with an aspirated peanut. The foreign body was fixed in her left main bronchus. A CO2 laser was used to safely cut and break the foreign body. Removal was successful after breaking it. But after the process, inflammatory tissue of the tracheal mucosa was ruptured. Bilateral tension pneumothorax followed after the rupture. The patient was treated with bilateral chest tube insertion. Here we present this BFA case with a rare and unexpected complication. We also review the appropriate literature.
Keywords: Foreign body; Tension pneumothorax; Chest tubes; CO2 laser

Bronchial foreign body aspiration (BFA) is a common condition between the ages of 0 to 3 years old. Also, it is an emergent condition with up to 7% mortality rate. 1,2 Nuts and food material are common causes of BFA, and these organic materials may cause localized inflammation and edema, resulting in partial or complete closure of the bronchus. 3 In adults, BFA usually occurs in the right main bronchus, whereas in children, the incidence rate of the BFA is not different according to the side. 4

Although persistent choking cough is the most common symptom of BFA, this diagnosis should also be considered in the presence of dyspnea, chronic cough, or recurring pulmonary infection. 2 Diagnosis should be made promptly, because BFA can result in various complications, such as atelectasis, pneumonia, and pneumothorax. However, pneumothorax is very rare in this setting as it occurs in only 1.5% cases of BFA. 5 We experienced a case of bilateral tension pneumothorax after foreign body removal from the left main bronchus of a 16-month-old girl. Tension pneumothorax is one of the most fatal conditions. Therefore, even though its incidence rate is very low, a better understanding of this condition is needed. Accordingly, we present this case with a review of the literature.

She had an episode of choking on peanuts 4 days prior to the admission, and her parents stated that wheezing breath sounds had been heard since that event. Physical examination showed decreased lung sound on the left side. A simple chest X-ray revealed a right-side deviation of the mediastinum and hyperinflation of the left thorax (Fig. 1). Although a foreign body could not be identified on the simple X-ray, a computed tomography (CT) scan showed a foreign body located in the left main bronchus, 2-3 cm below the carina, with accompanying atelectasis of the left lower lobe (Fig. 2A, 2B). 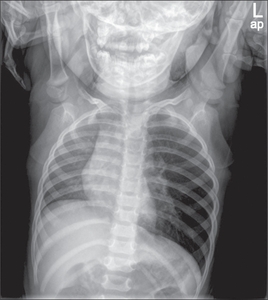 Figure 2. Enhanced chest CT. (A) Coronal view and (B) axial view of the foreign body in the left main bronchus 2-3 cm below the carina (white arrow).

We planned surgical removal of the foreign body using a flexible bronchoscope and bronchoscopic forceps. We used flexible bronchoscope because the patient was too young to find compatible size of available rigid bronchoscope. The bronchoscope (external diameter, 3.5 mm; diameter of the working channel, 1.2 mm) could not be inserted through the pediatric endotracheal tube (inner diameter, 3.5 mm, uncuffed). Therefore, the apnea technique was used. 6 A white foreign body, which is fixed in the left main bronchus, was identified. We tried to remove it with grasping forceps, but it was completely stuck with surrounding swollen mucosa. To remove it, we decided to cut it in half with CO2 laser (FiberLase; Lumenis Ltd., Santa Clara, CA, USA). To avoid heating injury, surrounding mucosa was covered with saline soaked cotton. Ventilation was stopped temporarily, the foreign body was cut in half by CO2 laser and both fragments were successfully removed with grasping forceps.

An inflammatory mucosal swelling in the bronchus wall (Fig. 3A, 3B) ruptured after the removal with a small amount of bleeding, followed by bronchial wall collapse. The patient’s heart rate dropped to 38 beats/min, and her oxygen saturation decreased. She was re-intubated and oxygen was administered; however, her oxygen saturation did not recover. The patient was then switched to manual ventilation using an AMBU bag, and atropine and epinephrine were administered. Immediately obtained chest X-ray showed the presence of bilateral tension pneumothorax. Therefore, chest tubes were inserted bilaterally (Fig. 4). Her oxygen saturation then recovered and heart rate returned to normal. The patient was moved to intensive care unit. Three days postoperatively, the patient’s vital signs had stabilized, and the chest tubes were removed. Chest X-ray showed no specific findings, and she was discharged on the seventh postoperative day. One month after discharge, the patient’s follow-up examination showed no other complications. 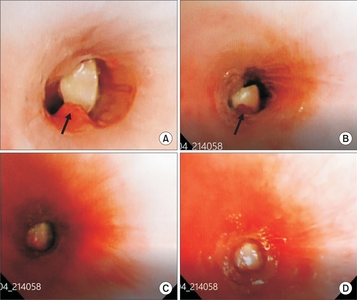 Figure 3. The foreign body was a whi­tish food material that partially obstructed the left main bronchus (A), Inflammatory mucosal swelling of the bronchus wall, which was caused by the foreign body (black arrow in A, B) ruptured after its removal (C, D). Bleeding occurred and the lung collapsed shortly after the removal of the foreign body. 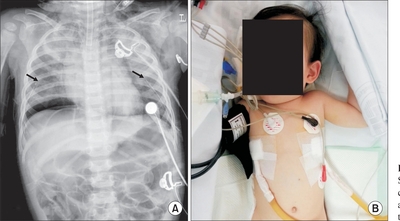 BFA is common in children due to three main reasons: (1) insufficient chewing due to lack of complete tooth development; (2) laughing and running around during eating, with insufficient swallowing mechanism; and (3) curiosity and carelessness. 7

The first symptoms of BFA include coughing, retching, wheezing, difficulty breathing, cyanosis, hoarse voice, and salivating. In cases of partial obstruction, inspiratory stridor, salivation, and voice changes may be apparent.

Chest X-ray should be performed in all suspected cases of bronchial foreign body, even if the patient shows no specific symptoms. The foreign body itself can be identified in only 8%-10% cases on simple chest X-ray. However, if signs such as hyperinflated thorax, decreased lung volume, obstructive emphysema, atelectasis, infiltration, or pneumothorax are observed on simple chest X-ray, bronchial foreign body can be suspected. However, chest X-ray may seem normal in up to 30% cases of BFA. 8 Also it has a limited sensitivity of 68% and a specificity of 67% for diagnosing BFA.

Therefore, chest CT might be needed for a more accurate diagnosis, not only in BFA cases but also in esophageal foreign body cases. 9 This imaging modality has a sensitivity of 99.83% and a specificity of 99.89% for diagnosing BFA. Moreover, chest CT can provide additional information such as shape, site and complications of the foreign body. 10 If the presence of BFA remains uncertain even after CT and chest X-ray, the diagnosis can be established using a flexible bronchoscope before performing explorative surgery using a rigid bronchoscope. 11

Atelectasis, pneumonia, bronchiectasis, cardiopulmonary arrest, vocal cord paralysis, and bronchial granuloma are complications that can be caused by the foreign body itself. Among these, pneumonia and granuloma are the two leading complications. 19,20 The potential complications of endoscopic manipulation include hemorrhage, pneumomediastinum (which is self-limited in most cases), 21 subcutaneous emphysema, and bronchial perforation. Furthermore, there may be laryngospasm and bronchospasm caused by the stimulation of the bronchial or laryngeal walls, although these are not common in procedures performed under general anesthesia. About half of patients with BFA visit a hospital over 72 hours after the aspiration episode. 10,22 In such cases, inflammatory changes may already present at the time of arrival, as in the case reported here. If an inflammatory lesion is observed around the foreign body, tracheal cartilage may be weakened. Thus, the removal procedure should be performed with utmost care to prevent tracheal wall damage.

We believe that multiple factors led to bilateral pneumothorax in the present case. First, regarding the left side, we think that this condition might have been caused by the rupture of a mucosal swelling. The cartilage wall under the mucosa might have weakened, with progression of inflammation, leading to perforation after the rupture. Regarding the right side, manual ventilation, which was performed to relieve the desaturation caused by the left pneumothorax, may have caused barotrauma and led to pneumothorax.

CO2 laser is widely used in the field of otorhinolaryngology. 23-28 However, there are not many reported cases of CO2 laser-assisted foreign body removal. In this present case, we achieved successful removal of foreign body. There is some possibility that CO2 laser might aggravate the mucosal injury. However, the ruptured mucosal swelling was identified even before the use of CO2 laser, and did not show any deterioration after use. Also, heating injury of CO2 laser was minimized with covered saline soaked gauze and stopping ventilation. In addition, rupture did not occur until the foreign body was completely removed. Thus, we believe the possibility of CO2 laser induced mucosal injury would be low, and if there were some, it might not be a direct cause of the rupture.