Abstract
Eagle syndrome is relatively uncommon with an incidence of abnormal stylohyoid length being 4% to 7.3%. A vast majority of individuals with elongation of the styloid process are asymptomatic. It is a syndrome marked by the clinical signs and symptoms of facial pain, ear pain, throat pain, dysphagia and a globus sensation in the throat. The cause of Eagle syndrome is believed to be a congenital or hormonal change and reactive osseus hyperplasia of the styloid process in response to pharyngeal trauma or surgical intervention, such as tonsillectomy. We present here a case of a 37-year-old female with a twelve-month history of both sided oropharyngeal pain and globus sensation which has no trauma or surgical intervention. The patient presented with a long, slender, bony intraoral projection that was found to be an elongated styloid process. We removed this elongated styloid process with a CO2 laser, and her symptoms disappeared.
Keywords: Eagle’s syndrome; Styloid process; Tonsil; Odynophagia

Eagle syndrome was defined in 1937, when Eagle reported a syndrome presenting with various symptoms such as dysphagia, odynophagia, sore throat, and foreign body sensation caused by an abnormal increase in the length of the styloid process. 1 The extended styloid process stimulates carotid arteries, cervical sympathetic nerves, and cerebral nerves, causing neck and facial pain, syncope, transient cerebral ischemia, and clicking joint noise when opening the mouth. 2

The normal length of the styloid process is 2.5-3 cm, and the length exceeding 3 cm is considered an abnormal extension, which may be caused by trauma, hormonal changes, and excessive calcification due to genetic causes. 3,4 Eagle syndrome, caused by an abnormal increase in the length of styloid process, has a low incidence of 4%-7.3%. Since most cases are asymptomatic, there are few complaints of symptoms. 5 When symptoms are reported, they are often mistaken for symptoms of tonsillitis, resulting in the prescription of antibiotics and painkillers.

This report describes a patient who complained of odynophagia and foreign body sensation on both sides of the oropharynx for a year. The patient was diagnosed properly as Eagle syndrome by using neck computed tomography (CT). After operation, using carbon dioxide (CO2) laser for shortening styloid process, the patient showed an immediate improvement in symptoms. Thus, we report this case with a review of relevant literature.

A 37-year-old female patient was admitted after a series of repeated unsuccessful treatments at a local hospital performed in response to complaints of foreign body sensation and odynophagia in the oral cavity that had lasted for a year. There was no dysphagia or a clicking joint noise while rotating the neck. Patients past medical history was hypothyroidism and family history was malignant lymphoma (mother). Patient showed no history of smoking, drinking, trauma, or surgery. In physical examination, there was no notable finding on both sides of the tonsils (Fig. 1A and B). Also there was no unusual finding in the oral cavity, nasopharynx, or both sides of the neck. Despite medication for tonsillitis at a local hospital for a year, there was no improvement in symptoms and the tonsils had no redness or edema to be considered as chronic tonsillitis. For these reasons neck CT image scan was performed.

Neck CT revealed extended styloid process, invading both sides of the tonsils and advancing inward (Fig. 2). As the apex of the styloid process piercing the tonsils, odynophagia was caused by tonsil movements while swallowing. Based on neck CT results and symptoms, the patient was diagnosed with Eagle syndrome. 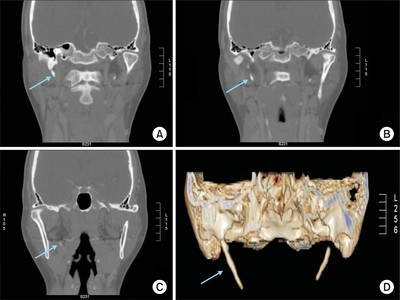 Since the patient showed no symptom relief after medication for a year and diagnosed as Eagle syndrome at this point, there was no treatment available other than surgery. Under general anesthesia, tonsillectomy was performed. Projections of the styloid process were detected in the area from where the tonsils were removed. After trimming the soft tissue around the styloid process, 2.0-cm long styloid process protruding into the tonsillar fossa was removed using CO2 laser and the cut surface was smoothed. Operation site was closed using absorbable suture materials (Fig. 3A-3D). The patient was discharged on the first day after surgery with immediate relief of symptoms such as foreign body sensation and odynophagia. Patient has been followed-up for 7 years after the surgery without any relapse or complaints of discomfort. 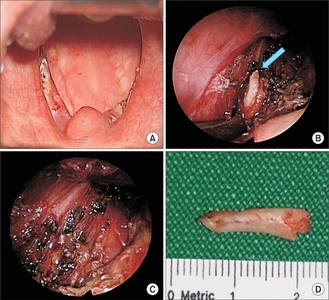 The anatomical abnormality in the stylohyoid complex was first described by Marchetti in 1656. Afterward, in 1937, Eagle reported the relationship between the abnormal extension of the styloid process and pain. Since then, the condition was known as Eagle syndrome. 1 It is characterized by foreign body sensation, dysphagia, prosopalgia, and sore throat confined to the tonsillar fossa and can cause pain or clicking joint noise even when turning the head or moving the tongue. In addition, it may stimulate the cranial nerves V, VII, IX, and X as well as cervical sympathetic nerves, leading to various symptoms including facial and neck pain. It must be differentiated from chronic tonsillitis, neuralgia, myofascial pain, dental pain, and temporomandibular joint abnormalities, which repeatedly cause similar symptoms. 2,5

The elongation of the styloid process occurs nearly 4% in patients, and if calcification of the hyoid bone area is included, the incidence increases up to 7.3%, although the actual complaining symptoms are rare. 5 Therefore, in clinical practice, it is an important diagnostic point to differentiate whether a patient’s symptoms are due to the elongation of styloid process. In this case, since the pattern of the extended styloid process piercing the tonsil was clear enough to cause odynophagia, the diagnosis was not difficult. Styloid process may vary in length but normally ranges 2.5-3 cm and above 3 cm is regarded abnormal extension. 4 Various causes of abnormal extension have been suggested, such as the residual cartilage, ligament calcification and ossification, traumatic hyperplasia and metaplasia, aging-related inflammation, and hormonal changes. 6 Two conditions has been suggested for pain triggering in Eagle syndrome. First, patients who had tonsillectomy for any other reason may develop scar tissues on the tonsillectomy site, which can irritate styloid process to generate pain. Another condition is called Stylocarotid artery syndrome in which the carotid artery or the internal and external carotid arteries are compressed, decreasing the vascular diameter or stimulating the nociceptor to cause pain. 7 However, in our case, the pain was caused by the styloid process directly piercing the tonsils which could be a different mechanism.

For diagnosis, patient’s medical history and physical examination such as palpation of the tonsils or tonsillar fossa is essential. Eagle syndrome is suspected if symptoms decrease when lidocaine is injected into the anterior pillar of the tonsillar fossa. 8 CT scans can show the length, angle, and ossification of the styloid process better than panoramic radiography. In particular, three-dimensional-reconstructed CT scans are useful to identify position of the styloid process, and its relationship with the surrounding organs. 9

Multiple therapeutic treatment may be considered in combination with analgesics, anticonvulsants, antidepressants, lidocaine, steroid, and nerve blocking injections. 10 Symptoms can be improved with medication administration, but they may recur when the medication is tapered. 11,12

A more fundamental and consistent treatment is a surgical approach, which is divided into transoral and transcervical approaches. In transoral approach, after tonsillectomy, muscles and mucosa membranes are dissected to find the apex of the styloid process, which is then removed using a cutting tool (CO2 laser). 13-18 Transoral approach has a cosmetic advantage which leaves no visible scar after surgery, but also it has a disadvantage that the styloid process does not completely expose during the operation. 19 Recently, a new method was introduced in which the styloid process is removed after an incision is made into the anterior tonsil pillar and the tonsil is only pushed to the medial side without performing tonsillectomy. 20 Complete resection is possible with the transcervical approach, although it has risks like post operation site scaring, long recovery period, and possibility of carotid artery damage during surgery. 21 However, in our case, if the styloid process piercing the tonsil is considered to be the cause of odynophagia, it seems to remove the styloid process after exposing it through tonsillectomy to be the most reasonable method.

In summary, the patient was diagnosed as Eagle syndrome using CT and cured completely after surgical intervention using CO2 laser, who used to suffer from odynophagia and foreign body sensation even after a long period of medication, can be a rare case and we would like to report this rare case with literature review attached.