Abstract
Optical-based imaging technology has high resolution and can assess images in real time. Numerous studies have been conducted for its application in the dental field. The current research introduces an oral camera that includes fluorescent imaging, a second study examining a 3D intraoral scanner applying a confocal method and a polarization structure that identifies the 3D image of a tooth, and finally, an optical coherence tomography technique. Using this technique, we introduce a new concept 3D oral scanner that simultaneously implements 3D structural imaging as well as images that diagnose the inside of teeth. With the development of light source technology and detector technology, various optical-based imaging technologies are expected to be applied in dentistry.
Keywords: Optical imaging; Intraoral camera; Intraoral scanner; Optical coherence tomography; Dentistry

Currently, many studies have been conducted to apply the technique of diagnosis to a dentist using an optical method that has high resolution and can acquire images in real time. The representative diagnostic device of the optical method is an oral camera. It uses a white light source (representatively LED) and is equipped with a compact camera module to implement images in the oral cavity as color images, and communicate with patients using diagnostic images. The oral camera has been developed as an oral camera for dental caries diagnosis using the green fluorescence feature of teeth by adding a fluorescent imaging technique. 1-7 In order to acquire a 3D image of a tooth and apply it to a prosthesis, research on a 3D intraoral scanner has been active and commercialized. Many research groups are conducting research not only for the diagnosis of the surface of the teeth, but also for the diagnosis of the inside of the teeth. In order to check the lesions inside the teeth, studies have been conducted to diagnose cracks and caries in the teeth by using a light source in the near-infrared region. 8-14 Recently, studies have been introduced to implement images of teeth inside using terahertz waves. 15 In addition, research on optical coherence tomography devices capable of diagnosing biological tissues such as gums as well as inside teeth has been actively conducted. Mainly, OCT images were conducted to diagnose various diseases such as dental caries, cracks, and resin repair, as well as oral cancer. 16

In this paper, I would like to review various studies that I studied using optical technology in the dental field. First, it is an oral camera technology that implements images inside the oral cavity using optical fiber lighting technology. Introducing the oral camera technology that is less sensitive to temperature, using optical fiber lighting to address the problem of temperature rise of LEDs, and also acquires fluorescence images. Therefore, an oral camera that can diagnose dental caries was introduced. Second, it is a study of a 3D intraoral scanner produced using a confocal microscope in the 3D structure of a tooth. In order to compensate for the noise problem, a disadvantage of the method of mechanically changing the focus of the lens, the studied oral scanner used a variable focus lens and acquired 3D images using pattern light. In addition, we introduced a study in which several acquired three-dimensional images were stitched to successfully acquire a full-arch image of a tooth. Finally, if the existing 3D scanner was able to acquire only a structural image of the surface of the tooth, it could be diagnosed by acquiring a 3D structural image of the tooth as well as a tomographic image inside the tooth using optical tomography technique.

INTRAORAL CAMERA BASED ON THE OPTICAL FIBER LIGHTENING 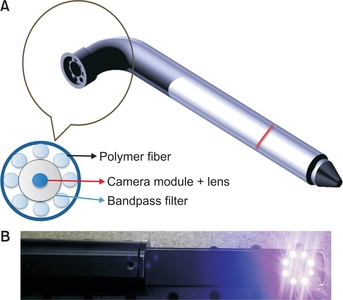 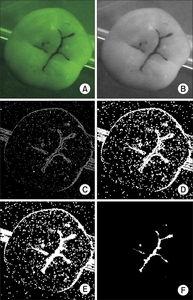 Figure 4. Fluorescence real time image (A) and white light image (B) of the human tooth after image processing. Fluorescence intraoral camera with fiber lightening could identify suspicious dental caries of human teeth through the different color.

Fig. 5 depicts the proposed 3D intraoral scanner. The system comprises four modules: a light source to project structured light onto the sample, a camera module to acquire images of the structured-illuminated sample, a tunable-focus module to vary the focal plane along the focus axis, and a mirror tip module capable of 90° angle acquisition. The light source was a white light-emitting diode (LED) (MCEP-CW8-079-3, Moritex, Saitama, Japan). The lens collimates the light from the LED, and a linear polarizer was used to select the vertically polarized component of the illumination source. The collimated light was illuminated to a pattern mask, and we used Ronchi ruling (1-inch × 1-inch (20 lp/mm), Ronchi ruling #58-777, Edmund Optics, USA) of 50-μm periodicity as the pattern mask in the experiments. The position of the Ronchi ruling is located at the same distance as the distance of the camera from the lens L1. The structured light passes through the polarizing beam splitter, enters the tunable-focus lens (EL-10-30-C, Optotune AG) through the lens L1, passes through the lens L2, passes through the quarter waveplate (Z-25.4-A-.250-N-556, Tower Optical Corporation, USA), and reaches the sample. The quarter waveplate was arranged at an angle of about 8 degrees to reduce reflection, as the quarter waveplate was not coated with anti-reflection. To eliminate internal reflection from the beam splitter and to improve the contrast ratio of the image, a cross-polarization detection technique was used.

In the experiments, we scanned the dental cast to confirm the feasibility of the proposed intraoral scanner. Fig. 6 shows a picture of the dental cast (Fig. 6A), and 3D point clouds (Figs. 6B-E) acquired from different points of view. The field of view (FOV) of the proposed system was 10.7 mm × 10.7 mm, where the pixel size of the camera is 7.6 μm × 7.6 μm and the size of images acquired by the camera is 1408 × 1408 pixels. The depth FOV was 10 mm, and 50 images were acquired by varying the focal planes at a uniform interval. Therefore, the axial resolution of the proposed system was approximately 200 μm. The precision of the system was evaluated by measuring the gauge block of 2 mm (18006, Mitutoyo, Japan) 10 times and comparing the three-dimensional coordinate values of the measurement data. The measured precision was 2 mm ± 10.39 μm. 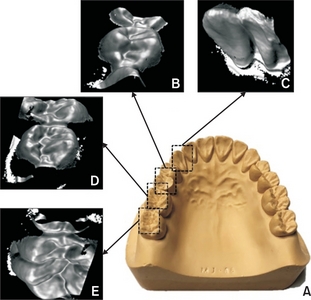 Figure 6. Dental cast (A) and 3D point clouds (B-E) scanned from the different points of view.

The image acquisition step immediately acquires the next images without waiting for the completion of the 3D point cloud generation step. As the 500 fps high-speed camera was used, and 50 images were acquired to reconstruct a point cloud in the experiments, the proposed system extracted 10 point clouds per second owing to multithreaded processing.

Figure 7. 3D point cloud of full arch of the dental cast (Fig. 6A) scanned by the proposed system; (A) mono­chrome image and (B) color image.

Fig. 8 depicts the SS-OCT system, which was constructed based on a Mach-Zehnder interferometer. The system is equipped with a MEMS-based scan probe to be used inside the mouth. The system comprises five modules: a wavelength swept source, an optical fiber interferometer, a MEMS mirror, a controller, and a digitizer, used for acquiring and displaying OCT volume images. Since the fast scanning speed and enhanced light penetration to the deeper layer were required to utilize the OCT system as an intraoral scan probe, a wavelength swept laser source (Thorlabs, SL1310V1-20048, USA) with a central wavelength of 1310 nm, a scanning rate of 200 kHz, and a full-width-at-half-maximum (FWHM) bandwidth of 100 nm, is used as the light source. The laser beam from the swept source is guided to the optical fiber Mach-Zehnder interferometer as shown in Fig. 8, which is divided into a sample arm and a reference arm through a 90:10 fiber coupler (Thorlabs, TW1300R2A2, USA).

Figure 9. 2D cross-sectional images (A) and 3D volume image (B) of human tooth acquired by the imple­mented OCT system.

The goal of the intraoral scanner is to digitally impress the specific areas of the teeth and gums that the dentists will treat. To scan the areas—whose dimensions are beyond the FOV of the MEMS-based intraoral scan probe—partially overlapped volume. The stitching of 3D volume images is implemented based on an ICP algorithm. 17 Since the ICP algorithm takes two-point clouds as an input, the point cloud must be extracted from each volume image. Herein, the set of the coordinates of the voxels that have higher intensities than a predefined threshold is considered as the point cloud. Fig. 10 shows point clouds extracted from the 3D volume images of Fig. 10B.

To confirm the applicability of an intraoral scanner based on the OCT system equipped with a MEMS-based intraoral scan probe, the OCT volume images of the extracted human teeth were sequentially acquired, as shown in Fig. 11A-D. The overlapping percentage of the sequentially acquired OCT volumes was more than 70% in the conducted experiments. Fig. 11E-H show point clouds extracted from the OCT volume of Fig. 11A-D. As shown in Fig. 11E-H, voxels located at the surface of the teeth were extracted as the point cloud since the voxel intensities at the surface had relatively higher values than those in other regions of the teeth. Therefore, the set of coordinates of the voxels having higher intensity than a predefined threshold was considered as the point cloud. 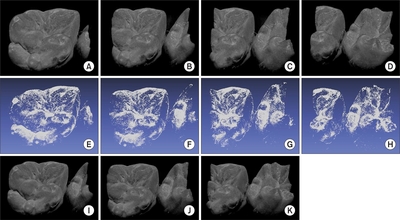 Fig. 12B shows an example of stitching of OCT volumes that were successively acquired from extracted human teeth, and Fig. 12C is a three-dimensional image of the enlarged tooth of Fig. 12B. The image of the stitched 3D volume contains 2D cross-sectional information of all parts of the teeth. Fig. 12A shows 2D images reconstructed in the XY-plane, while Fig. 12D shows 2D images reconstructed in the XZ-plane. As it can be seen from the 2D cross-sectional images, the presence of crack, tooth decay, and teeth resin treatment, can be confirmed. In this way, the 3D intraoral scanner based on OCT can acquire 3D structural and diagnostic images of the teeth. It is expected to be extensively used in future diagnoses and teeth treatments. 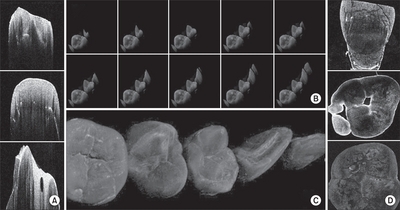 We have introduced methods of diagnosis in dentistry using optical methods. Using a fiber optic light source, the problem of temperature in the oral cavity of the LED was solved, as well as a device for diagnosing cavities using the spontaneous fluorescence characteristics of the tooth. In addition, by using a confocal type polarization optical system and a focus variable lens, the noise problem generated by the conventional oral camera was solved, and a 3D image was obtained using a fixed pattern. In addition, by using the cross polarization method, it has succeeded in acquiring images of highly reflective parts such as metal. Lastly, most of the three-dimensional images of the surface, and the disadvantages of the oral scanner having the function of acquiring only the three-dimensional structure, through the optical coherence tomography technique, acquired the internal images of the teeth to enable diagnosis, and at the same time three-dimensional Since images can be acquired, the possibility of use as a next-generation oral scanner is increased. As suggested, the optical imaging method is harmless to the human body, has high resolution, and is capable of checking images in real time, so it is expected to be used as a diagnostic device in dentistry.