Abstract
Background and Objectives
Breast reconstruction has the advantage of reducing the loss of the body image of patients after mastectomy surgery, and also improving the quality of the social and sexual life of breast cancer patients. However, in surprising and unfortunate number of patients, acute postoperative pain persists beyond the normal course of postsurgical recovery. We set out to investigate the effect of local dynamical micro-massage (LDM) treatment for achieving pain relief and reducing other postoperative complications.
Materials and Methods
We performed a retrospective analysis on 58 patients who underwent LDM treatment for postoperative pain management at Soonchunhyang University Bucheon Hospital between February 2017 and June 2019. Those patients who complained of persistent postoperative pain, which was uncontrollable with medication, were treated with LDM. The degree of pain and discomfort with contracture were recorded using numerical rating scale (NRS) scoring system with numbers from 0 to 10 (‘none' to 'worst').
Results
The median NRS score of pain was reduced by 62.3% from the start to the end of LDM treatment (<0.001). Further, the NRS score of discomfort with contracture was reduced 66.0% (<0.001). There was no complication related to the LDM treatment.
Conclusion
Dual-frequency ultrasound LDM can be an effective therapeutic option for persisting pain after breast reconstruction surgery. It was also effective in improvement of discomfort with contracture and erythema of the surgical wound.
Keywords: Dual-frequency ultrasound; Local dynamical micro-massage; Postope-rative pain; Contracture; Breast reconstruction

Nowadays, as people are concern with their quality of life, reconstruction of breast is considered essential for breast cancer patients. Breast reconstruction has the advantage of reducing the loss of body image of patient after mastectomy surgery and improving the quality of social and sexual life of breast cancer patients. 1 In Korea, the National Health Insurance Service (NHIS) began to cover breast reconstruction after total mastectomy in April 2015. 2 With the expansion of insurance for breast reconstructive surgery, more reconstructive surgery is expected to be performed. In addition to the increased interest in such reconstructive surgery, there is an increasing concern about the complication of reconstructive surgery. There are many complications; seroma and hematoma collection, infection, skin necrosis, loss of sensation, contracture, etc. Among these complications, the post-operative pain is most common and annoying one to the patients. For the most of patients, acute postoperative pain after reconstruction surgery is an expectable surgical outcome, and it usually resolves with time and appropriate medication. 3 However, in surprising and unfortunate number of patients, acute postoperative pain persists beyond the normal course of postsurgical recovery. 4 These patients report less satisfaction with the reconstruction surgery, even though the aesthetic outcomes were satisfactory. Also, the prolonged acute postoperative pain can be a risk factor for the development of chronic pain syndrome. 5 So, it is clinically important to manage the early acute postsurgical pain with aggressive methods. Various agents (opioid vs. non-opioid), routes (oral, intravenous, neuraxial, regional) and modes (patient controlled vs. ?as needed?) for the treatment of postoperative pain exist. 6

Also, therapeutic ultrasound treatment has been used for the 40 years to treat soft tissue injury. 7 Ultrasound therapy is widely applied in various musculoskeletal disorders such as joint contracture, scar tissue, and tendinitis, and it is known to increase extensibility of collagen tissues and raise pain thresholds. 8 We had clinical experience of using local dynamical micro-massage (LDM®-MED; Wellcomet, Karlsruhe, Germany) for radiation-induced fibrosis in a breast cancer patient. After 12 times of LDM treatments, the NRS score was decreased from 6 to 2. 9 With this clinical experiences, we used LDM treatment for the postoperative pain in breast reconstruction patients. In the following study, we set out to investigate the effect of LDM treatment in pain relief and other postoperative complications.

We performed a retrospective analysis on 58 patients who underwent LDM treatment for postoperative pain management at Soonchunhyang University Bucheon Hospital between February 2017 and June 2019. The inclusion criteria for this study were as follows: patients who had uncontrollable postoperative pain after unilateral or bilateral breast reconstruction with latissimus dorsi myocutaneous (LD) flap and transverse rectus abdominis myocutaneous (TRAM) flap. The data were collected from the database and medical records of the patients. Written consents were obtained from each patient for both the laser treatment and the publication of photographs of the results.

Patients who complained persistent postoperative pain, which was uncontrollable with medication, were treated with LDM (Fig. 1A) daily or every other day. The Ulcus cruris mode of LDM dermatologic program was used in treatment. The protocol of this mode was set as 10 MHz with intensity of 1.5 W/cm2 and 1.0 W/cm2 for 2 minutes each, then was followed by 3/10 MHz dual frequency setting with intensity of 1.0 W/cm2 and 2.0 W/cm2 each for 3 minutes (Fig. 1B).

Figure 1. (A) LDM-MED® (Well­comet, Karlsruhe, Germany). (B) The Ulcus cruris mode of LDM-MED® dermatologic program was used in treatment.

At the beginning and end of the LDM treatment, the patients were asked to evaluate their degree of pain, discomfort with contracture with NRS scoring system with numbers from 0 to 10 (¡®none' to 'worst').

Statistical analyses were performed using SPSS version 26.0 (IBM Corp., Armonk, NY, USA). The Wilcoxon signed rank test was used to compare the patients’ NRS scores of pain and discomfort with contracture before and after LDM treatment. Statistical significance was considered to be <0.05. 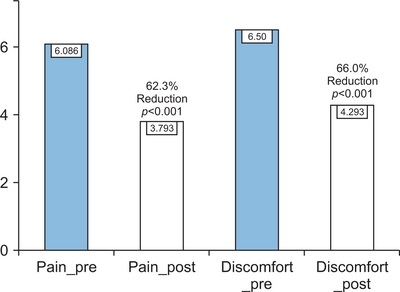 Figure 2. Changes in median NRS score of Pain and Discomfort with contracture from the start of Local dynamical micro-massage (LDM) to the end of LDM. -values from Wilcoxon signed rank test.

Pain is defines as an unpleasant sensory and emotional experience associated with actual or potential tissue damage, or described in terms of such damage according to The International Association for the Study of Pain's. 10 More than 80% of patients experience acute postoperative pain after surgical procedure, and approximately 75% of patients with postoperative pain report the severity of pain as moderate, severe, or extreme. 11,12 With underestimation of importance of aggressive pain control, many patients develop chronic pain after surgery. 13 Mechanism of postoperative pain with surgical incision can be understood in 3 path way; Spinal sensitization, peripheral sensitization, and neuroplastic change in brain. 14 In patients of breast reconstruction surgery, younger age, bilateral reconstruction, and severity of preoperative pain, anxiety, and depression were found as the factors associated with more severe acute postoperative pain. 4

Medical ultrasound was first developed by Dr. George Ludwig at the Naval Medical Research Institution in the late 1940s, and there have been many attempts to use it in various medical field. In 1942, Lynn and Putnam successfully used ultrasound waves to destroy brain tissue in animals. It was considered as the earliest experiment of therapeutic ultrasound application on biological tissues. 15 Therapeutic effect of ultrasound is related in tissue healing in two different mechanism; thermal and non-thermal. In thermal mode, it can be used to selectively raise the temperature of tissue by increasing molecular vibration causing heat generation. 16 In non-thermal aspect, the cavitation and acoustic streaming effect are considered as the main mechanism. 17 In field of pain control with therapeutic ultrasound, the mechanism of pain relief is assumed as the followings: (i) elevation of tissue temperature leading vasodilation and acceleration of lymph flow; (ii) increased cell membrane permeability and improved gas exchange, and (iii) reduced conductivity of insonated nerves with resultant decrease in pain transmission. The increased blood flow also helps the resolution of chronic pain. 7

Local dynamical micro-massage is the dual frequency therapeutic ultrasound. In the dual-frequency of LDM wave, the frequency is not constant, but oscillates between two frequencies; 3 and 10 MHz. This oscillation in every 5 ms is effective in decreasing MMPs and to stimulate HSPs, helping wound healing process. 18 This presents the unique possibility to produce a dynamic modulation of the LDM-induced micro-massage effect. 19 Irene Tausch et al. in 2015, also demonstrated the benefit of LDM treatment in reducing the level of pain after injection lipolysis. 20 In our study, the patients received 2 to 46 times of LDM treatments for the postoperative pain which was not controlled with conventional medication. We found the significant improvement of their pain and discomfort with contracture after series of LDM treatments.

There was several limitation in our study. First, the pain and discomfort score was subjective method of evaluating the patients’ status. More objective description of their status would be required for the further study. Second, the study was retrospective design for the pain evaluation with medical chart review. Despite these limitations, this study showed there was significant improvement of patients’ pain and discomfort, and LDM could be an alternative method of controlling postoperative pain after breast reconstruction surgery.

Dual-frequency ultrasound LDM can be an effective therapeutic option for persisting pain after breast reconstruction surgery. It was also effective in improvement of discomfort with contracture and erythema of surgical wound. Further study could be designed to compare the effect with other conventional pain control methods.

The authors declare that they have no conflicts of interest to disclose.