Abstract
Keloids are pathologic fibroproliferative conditions characterized by excessive collagen deposition during wound healing. The pathogenesis of keloids is not fully understood, and current treatment options show variable results. In this case report, the patient developed a keloid after bilateral total thyroidectomy, and was treated with a combination approach using fractional ablative laser systems along with cryotherapy and triamcinolone injection. After seven monthly sessions of combination treatment, the patient presented marked improvement of the scar texture and symptoms. Furthermore, there was no recurrence for up to 2 years. We propose this combination as a safe and effective treatment option for keloid patients.
Keywords: Keloid; Scar; Fractional laser

Herein, we report a case of keloid patient treated with combination treatment using fractional ablative lasers systems along with cryotherapy and triamcinolone injection. After monthly seven sessions of combination treatment, the patient presented marked improvement on the scar texture and symptoms with no remarkable side effects or recurrence over two years.

A 21-year-old Korean woman visited the clinic with a keloid on the post-thyroidectomy site. The patient underwent a bilateral total thyroidectomy due to thyroid adenocarcinoma six months ago. A well-demarcated erythematous firm mass was noted on the patient’s anterior neck between the clavicles (Fig. 1A and B). The patient presented with pain and pruritus on the keloid and tenderness due to traction of the skin. 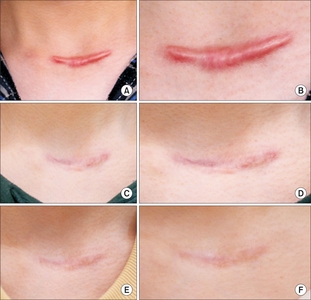 Figure 1. (A, B) A keloid scar on the anterior neck of the patient. (C, D) After five sessions of combination treatment with fractional ablative CO2 laser followed by cryotherapy and triamcinolone injection. (E, F) Two year after the initial visit. The patient did not show recurrence on the treated lesion.

After six months, the patient showed telangiectasia on the treated lesions with a visible reduction of the keloid volume (Fig. 1C and D). The patient was treated with a pulsed-dye laser using RegenliteTM (Chromogenix, Swansea, UK) for two additional sessions and instructed to use silicone sheet (MegaHeal®, L&C Bio, Seoul, Korea) for at least six hours every day. After nine months, the patient showed marked improvement in scar texture. During the follow-up period for two years, the patient did not show additional pain or pruritus without worsening or recurrence (Fig. 1E and F).

Various treatment options have been suggested for keloid, yet no single modality is known to be fully effective. In most clinical settings, intralesional triamcinolone injection remains the first-line therapy for the treatment keloids. 6,7 However, monotherapy with triamcinolone may cause frequent recurrence and high rates of potential adverse effects, including skin atrophy, hypopigmentation, and telangiectasia. Therefore, the recent advance in clinical studies of scar treatment recommends a combinational approach over monotherapy. 3,4,8

The addition of cryotherapy with triamcinolone injection leads to more rapid response leading to the early flattening of the lesions due to microvascular damage. 4,7 Fractional ablative CO2 laser systems are commonly used for drug-delivery by creating micro-channels deep into the dermis. The use of topical triamcinolone or steroid-based preparations after fractional CO2 lasers have shown a beneficial effect in a hypertrophic scar or keloid treatment. 7 Recently, our group have reported a retrospective review on the effect of combination treatment on various types of keloid scars. We believe the addition of fractional CO2 laser to the combination of cryotherapy and intralesional TA injection may enhance effective delivery of triamcinolone to the entire areas of the firm lesions of a keloid scar. 7,9 Additionally, we used pulsed dye laser system to target post-treatment telangiectasia on the current patient. Pulsed dye laser systems are known to improve the erythema and vascular component of keloid scars by improving the pliability of the lesion. 3,10

Despite decades of research, scar treatment remains a challenging condition, and current treatment options still have limitations—better understanding into the pathogenesis with allowing for the development of newer and more targeted treatment in the future.

The authors suggest that a multimodal approach can be applied to target various pathogenic factors in keloid scars. And we demonstrated that the combination usage of multiple lasers, superficial cryotherapy, and intralesional triamcinolone injection is safe and effective for keloid patient. Further prospective, controlled investigations are needed to compare the efficacy of combination treatment and suggest the optimal treatment parameters for keloid scars.

The authors declare no conflicts of interest.