Abstract
Background and Objectives
Melasma is an acquired pigmentary disorder characterized by brown or dark brown colored macules and patches which mostly involve the face. Compared to nanosecond lasers, picosecond lasers have fewer adverse effects on surrounding tissues and give better results for melanin fragmentation. The purpose of this study was to evaluate the efficacy of the pico-toning technique using a low fluence 1,064-nm Nd:YAG laser on melasma patients.
Materials and Methods
This study is a retrospective analysis of melasma cases treated using the pico-toning technique from June 2017 to November 2020. Based on photographic images, the modified Melasma Area and Severity Index (mMASI) score was blind evaluated by two independent plastic surgeons. Patient satisfaction was assessed through a 5-point Likert scale questionnaire after treatment sessions. All adverse effects and complications were reviewed based on medical records.
Results
A total of 23 patients were included in the study. The mMASI scores for baseline and 2 months after the last procedure were 5.1 ± 1.4 and 2.6 ± 0.4, respectively. The mean mMASI score reduced significantly after the treatment session (p < 0.05). The patient satisfaction score with the procedure was 3.8 ± 1.0. The subject satisfaction score and difference in the mMASI score before the procedure and 2 months after the last procedure showed a significant correlation. Adverse effects observed in this study were erythema (n = 1) and edema (n = 1).
Conclusion
The results of the study show that the pico-toning technique is effective in Asian patients with melasma. We believe that safety was enhanced by using low fluence, and thus better results were achieved with fewer adverse effects.
Keywords: Picosecond; Laser toning; Pigmentation; Skin pigmentation; Melanosis

Melasma is an acquired pigmentary disorder and is characterized by brown or dark brown colored macules and patches. 1 Although the exact cause of the onset is unknown, ultraviolet light, genetic predisposition, hormonal effect, pregnancy, and phototoxic drugs are the main factors. And it is also a cause of deterioration. 2,3 It usually occurs on the face and rarely occurs in other areas.

The use of sunscreens to block ultraviolet light and topical anti-melanogenesis agents including hydroquinone, retinoic acid, glycolic acid and corticosteroid are common first-line treatments for melasma. 4,5 Hydroquinone, which is a tyrosinase inhibitor, has been proven to be effective in the treatment of melasma but is known to be effective only in epidermal type melasma. 6 A chemical peel to remove melanin is also one of the treatment options and glycolic acid and salicylic acid are available. However, this also has a disadvantage that it is not effective in mixed type or dermal type melasma and that recurrence may occur. 7

Recently, laser-based treatment of hyperpigmentation conditions of the skin including melasma has been proposed as an adjunctive treatment. 7 The main mechanism in the treatment of pigmentation using a laser is that photo-thermal energy targets the melanin pigment to cause “selective photothermolysis”. 8 Lasers widely used in the treatment of pigmented skin include Q-switched Ruby laser, Q-switched alexandrite laser and Q-switched Nd:YAG laser. 9,10 However, none of the laser treatments are consistently effective enough to become the gold standard, and complications including pain, erythema, and post-inflammatory hyperpigmentation or hypopigmentation are frequently reported. 10,11

Picosecond laser uses extremely short pulse duration, that is, 300-500 picosecond pulse duration. Because of these properties, it can deliver higher energies and shows a lower photothermal effect than other laser technologies with a longer pulse duration range. As a result, it has the advantage of minimizing post-procedure pain and minimizing skin discoloration after laser treatment. 12 In the same fluence, the picosecond laser also causes more melanin fragmentation with higher energy than the nanosecond laser. 13 Therefore, when using picosecond laser, melasma can be treated with low fluence and satisfactory results can be obtained with minimal side effects, 14,15 which we refer to as the ‘pico-toning technique’.

The purpose of this study was to evaluate the efficacy of the pico-toning technique using a low fluence picosecond 1,064-nm Nd:YAG laser in melasma patients.

This study is a retrospective analysis of the cases treated using picosecond 1064-nm laser treatment in patients diagnosed with melasma from June 2017 to November 2020. The patient's gender, age, clinical finding, the parameter for the performed procedure, and photographic images were collected from medical records. Patients with underlying skin disease, immunodeficiency, taking hormone replacement therapy, current pregnancy, breastfeeding were excluded from the study. In addition, patients who had been treated with topical agents such as retinoid, corticosteroid, hydroquinone within one month were excluded from the study. Photographic images were performed prior to the procedure and were taken 2 months after the last procedure. Photographic images were obtained under the same condition. 2D images of the whole face were taken in a natural manner (right lateral, right lateral 45°, central, left lateral 45°, left lateral). This study was approved by the Institutional Review Board of Soonchunhyang University Bucheon Hospital and performed in accordance with the Declaration of Helsinki.

A picosecond Nd:YAG laser device, PICOCARE® (WONTECH, Daejeon, Korea) was used in this study. Prior to initiation of treatment, a topical anesthetic agent (EMLA®; Recipharm Karlskaga AB, Karlskoga, Sweden) was applied to the treatment area for 1 hour. After that, the topical anesthetic agent was wiped out and laser treatment was performed. Picosecond laser treatment was performed at a wavelength of 1,064-nm, 7-10 mm spot size, 0.5-0.8 J/cm2 fluence, 10 Hz frequency, maximum 3 passes. The treatment protocol is presented in Table 1.

All adverse events and complications, including erythema, edema, bullae, post inflammatory hyperpigmentation, and hypopigmentation, on medical records were reviewed during treatment and visitation.

Statistical analysis was performed using Data were analyzed using SPSS Statistics for Windows, Version 26.0 (IBM Corp, Armonk, NY, USA). The Wilcoxon-signed rank test was used to compare the mMASI scores of pre-treatment and 2 months post-treatment visits. Spearman correlation test was used to compare the correlation between the subject satisfaction score and the difference in the mMASI score before the procedure and 2 months after the last procedure. Descriptive statistics are expressed as means ± standard deviations. A p-value of less than 0.05 was considered statistically significant.

A total of 23 patients who were clinically diagnosed with melasma were included in the study. The mean patient age was 51.1 ± 9.3 years. The baseline mMASI score was 5.1 ± 1.4. The mMASI score performed 2 months after the last procedure was 2.6 ± 0.4 (Fig. 1). Following the laser treatment, the mean mMASI score decreased significantly. (p < 0.05) Treatment sessions that the patients underwent the pico-toning technique was 5.0 ± 1.3. After treatment, patients' satisfaction with the procedure was 3.8 ± 1.0, with 4 points (satisfied) being the most frequent. The results of Spearman's correlation coefficient showed significant relationships between the subject satisfaction score and difference in the mMASI score before the procedure and 2 months after the last procedure (r = 0.844, p < 0.001) (Fig. 2). The photographic finding of a case before the treatment and 2 months after the last procedure is presented (Fig. 3). Adverse effects observed in this study were erythema (n = 1) and edema (n = 1), and no recurrence, post-inflammatory hypopigmentation, or hyperpigmentation was observed. The demographic data of the patients included in the study have been listed in Table 2. 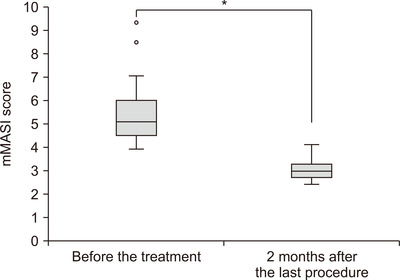 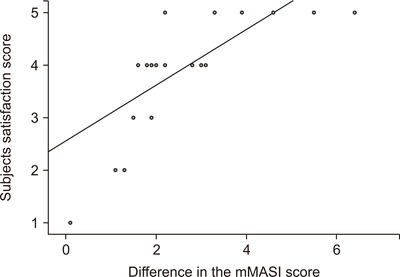 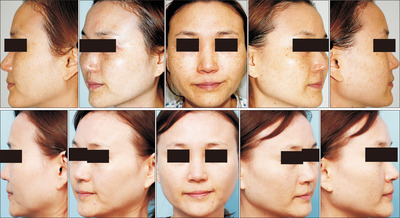 Selective photothermolysis, presented in 1983, is the concept that specific wavelengths can be used to target specific chromophores. 8 Using a duration shorter than the target's thermal relaxation time in terms of pulse duration can reduce damage to the surrounding tissue. With the advent of the picosecond laser, it was found that target destruction is possible in a state where there is little heating or damage to the surrounding tissue in the pulse duration range of 10-100 picoseconds, and this leads to the concept of photomechanical effect. 17 Laser-induced optical breakdown (LIOB) refers to the process that plasma is generated as a result of free “seed” electrons by multiphoton absorption or by thermionic emission, 18 leading to breakdown. 19 In the skin, melanin provides free seed electrons by laser-heated melanin, and the resulting plasma forms vacuoles in the epidermal layer. Based on these theoretical backgrounds, a picosecond laser can be judged as an appropriate treatment option for melasma.

Picosecond laser can target not only melanin but also hemoglobin, and dermal hemorrhage has been confirmed histologically. 19 Therefore, it is essential to control fluence for proper energy delivered to reduce adverse effects. In 1999, Goldberg et al. introduced the concept of laser toning for the first time by conducting skin resurfacing using low fluence Nd:YAG. 27 In subsequent studies, the application of low fluence showed an effect on skin rejuvenation and skin pigmentation at the same time. 24,28,29 Kang et al. introduced a dual toning technique combining two modes, nanosecond and microsecond, using 1,064-nm Nd:YAG. 30 We subsequently named it the "pico-toning technique" as laser toning using a picosecond laser.

This study demonstrates the efficacy and safety of pico-toning technique with a low fluence picosecond 1,064-nm Nd:YAG laser in Asian female melasma patients. The limitations of this study are that the study design is a retrospective study of treatment protocol solely with pico-toning technique, the number of patients is small, and there is a lack of long-term follow-up data after the end of treatment. We look forward to conducting large-scale prospective studies in the future, including comparisons with other laser or topical treatment options for melasma.

The authors declare no conflicts of interest.