Abstract
Background and Objectives
Several predicted optimal parameters for laser treatment have been suggested, making the settings subject to variation. Thus, picosecond lasers may require more data and studies to optimize the laser parameters, increase the efficacy of each session, and minimize the total number of sessions. This study evaluated the results of picosecond laser tattoo removal in variable locations, focusing on the aesthetic outcome, number of procedures, and adverse effects.
Materials and Methods
Nine patients who underwent picosecond laser treatment from February 2014 to July 2020 were enrolled. Before the procedures, the required number of sessions was estimated using the Kirby-Desai scale. At the end of the treatment, the patients assessed their satisfaction. The patient and two plastic surgeons assessed the clearance of the tattoo.
Results
The mean of the clearance was 86.6% in both the patient and investigators assessment. The patients reported satisfaction for an average score of 5.1 ± 0.78 for the aesthetic outcome, 4.5 ± 0.78 for pain, 4.1 ± 0.92 for the number of procedures, and 4.7 ± 0.97 for adverse effects. The average number of actual procedures was 6.7 ± 1.20. The average Kirby-Desai score was 7.1 ± 1.45. Their correlation coefficient was 0.803, which is considered a strong positive correlation.
Conclusion
Picosecond lasers have a remarkable ability to degrade smaller tattoo pigments through a photoacoustic effect. Moreover, a picosecond laser treatment for tattoo removal can be a safe and effective method. Picosecond lasers are a promising technology with the potential to optimize the treatment of tattoos.
Keywords: Laser therapy; Tattoo removal; Kirby-Desai scale; Picosecond laser

Since ancient times, tattoos have been used to express an artistic perspective, enhance beauty, demonstrate uniqueness and signify belonging or punish. A rise in US adult tattoo prevalence was reported from 16% in 2003 to 21% in 2012. 1 Like western countries, tattooing has been gaining popularity in Korea. 2 With the increasing popularity of tattooing, the increasing numbers of people are also requiring tattoo removal. Lasers were first used to remove tattoos in the 1960s. 3 Selective photothermolysis, first described in the early 1980s, which is the concept that when a chromophore is heated for shorter than its thermal relaxation time, selective destruction of that chromophore can occur without damaging surrounding tissue. 4 To achieve selective photothermolysis, sufficient energy is needed to be delivered with a pulse duration which is shorter than the thermal relaxation time, defined by the size and shape of the target. The smaller the target is, the shorter the thermal relaxation time would be and therefore the shorter laser pulse duration is required. In the case of tattoo, the ink is the chromophore. The pigment is very small, so the thermal relaxation time is less than 10 nanoseconds, suggesting that rapid heating with short pulse duration, in the picosecond range, should be effective. 5-7 A wide range of predicted optimal parameters for laser treatment have been suggested, and it make the settings and parameters subject to be variable. Thus, picoseconds lasers may require more data and studies to optimize laser parameter, increase the efficacy of each sessions, and minimize the total number of sessions.

The purpose of this study was to evaluate the results of picosecond tattoo removal in variable location, focused on aesthetic outcome, the number of procedures and adverse effects.

We performed a retrospective analysis on 9 patients who underwent tattoo removal using picosecond laser between February 2014 and July 2020. A senior surgeon (E.S.P.) performed the procedures at Soonchunhyang University Bucheon Hospital. We excluded the patients with a history of keloidal scarring, pregnancy, infection of wound or the administration of photosensitive drugs. Patients who did not have at least 6 months of postoperative follow-up were excluded. All outcome data including complication and aesthetic outcome were reviewed before and after the picosecond laser procedure.

This study was approved by the institutional review board and conformed to the Declaration of Helsinki. Informed consents were obtained from all patient for both the laser procedure and the publication of the results including photographs.

Before the laser procedure, all patients applied a 5% lidocaine topical anesthetic ointment (Emla®; AstraZeneca AB, Karlskoga, Sweden) to the target area for 30 minutes. This topical ointment was washed off with soap and water before the procedure. Protective eyewear was properly placed on the patients.

All of laser procedure was performed with picosecond laser (PICOCARE®; WONTECH, Daejeon, Korea). Treatment was performed with a wavelength of 532 nm for red colored tattoo in one case or 1,064 nm picosecond for dark colored tattoo for the rest. Single procedure with one pass were performed using a spot size of from 4 mm, fluence of 2.5 to 4.8 J/cm2, repetition rate of 6 to 10 Hz. The parameters were adjusted based on the size and type of tattoo and patient’s skin type. The lower fluence was usually progressively increased on each subsequent procedure. The number of procedures was dependent on the rate of clearance and the physician’s discretion. Intervals between sessions were determined individually about 6 ± 2 weeks, depending on the stage and results.

Cold compresses were used to minimize discomfort and an antibiotic ointment or ointment-based emollients was applied to the target area after each laser treatment session. The patients were educated to avoid direct sunlight and recommended to apply a sunscreen agent between the laser treatment sessions. We educated the patients to visit hospital immediately when they had any adverse effect.

Prior to initiation of the treatment, a Kirby-Desai score was assessed for each tattoo based on patient’s history and photographs. In the Kirby-Desai scale, parameter scores were added to yield a total score needed for prediction of the required number of sessions, consisting of six parameters: skin type, location, color, amount of ink, scarring and layering (Table 1). Tattoos scoring greater than 15 points may be difficult to remove.

Figure 1. Clinical photographs A 31-year-old female patient with tattoo on left hand consisting of single black color. (A) Prior to the procedure. (B) Immediately after the first procedure of tattoo removal, whitening results prevents subsequent pulses from reaching the remaining underlying pigments are shown. (C) After the final 4th session, for 1 year, there was 80% clearance of peripheral portion, and almost complete clearance of central portion. 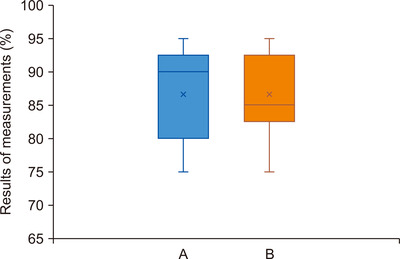 Picosecond lasers, with pulse duration of 10–12 seconds, are emerged as fast and effective method for tattoo removal because most tattoo pigment size ranges from 30 to 300 nm with short thermal relaxation time (< 10 ns). 8 Therefore, picosecond lase can provide greater thermal stress in targeted tattoos. 9 In addition to photoacoustic effects within targeted tattoos leading to mechanical dissolution of the ink particles, endothermic steam carbon reaction occurs, which change the properties of inks, reducing their visibility. 10,11 These mechanisms of picoseconds laser tattoo removal have verified by computer simulation. 12 Furthermore, picosecond technology could permit lower fluences to be delivered, which theoretically lower the risk of adverse effect. 7

A wide range of predicted optimal parameters have been suggested, which make the settings and parameters subject to variation. In our study, the patients received variable times of picosecond laser in variable parameter setting, adjusted for the tattoo characteristics and patient’s skin type.

The Kirby-Desai scale was first introduced in 2009 and has been validated and extensively described in the literatures. 14 This scale can be used before the treatment to determine the number of treatments required for tattoo removal, decreasing the uncertainty of the laser-removal process. We used Kirby-Desai scores for assess the number of sessions, and the correlation between the estimated number and the actual number was strongly positive (0.803). Patients rated the number of procedures score of 4.1, which is relatively low score comparing with other subjective results, although of constant effort to optimize laser parameter and minimize the total number of sessions. However, this estimation was positive for them because it used to exceed the patient expectation, so did not over promise.

Adverse effects included pain, swelling and blistering, but resolved within few days, and it is related to the high score in patient satisfaction for adverse effect. We concerned hyperpigmentation or hypopigmentation, as reported as 20% of hypopigmentation and 13% of hyperpigmentation in previous study using picosecond alexandrite laser. 15 However, we observed slight hypopigmentation in one case. In the study by Kirby et al., most of undesired pigment alterations were transient. 16 The patients rated the pain score of 4.5, which is relatively satisfactory. All of patients were uniformly received topical anesthesia for 30 minutes, leading to sufficient anesthetic effect.

Limitations of our study should be noted. First, we had small sample size. Even though we used distribution-free statistic method, further studies including larger sample size are needed. Second, there was no control group in this study. Prospective, controlled, and blinded studied are need for further evaluation. Third, the assessment for clearance of tattoo removal is based on photographic evaluation. Even though we educated how to evaluate the clearance by showing reference pictures, this method could be subjective.

Picosecond lasers demonstrate a greater ability to degrade smaller tattoo pigments through the photoacoustic effect. We provide evidence that the use of picosecond laser treatment for tattoo removal can be a safe and very effective method. Picosecond lasers are a promising technology with the potential to optimize the treatment of tattoos.

The authors report no conflicts of interest.