The shoulder press exercise, which lifts the barbell over the head during the resistance exercise, is widely used in the training, rehabilitation and sports field of athletes as a movement to train the muscle group around the shoulder.1 Especially, the shoulder press in the standing posture has the operation of lifting the barbell over the head, and the lumbar extensor for stabilizing the trunk is active by using deltoid muscle and triceps brachii as the prime mover.2

Since muscle power is very important for improving athletic performance, various exercise methods performed by elastic movement are presented in sports sites.6 The most common methods are clean, snatch, and plyometric training. These exercises help players reach their target point at the force-velocity curve, and they need to train at 30-80% 1RM load strength to maximize Type II muscle fiber, which improves power.7

The ballistic movement, which exerts power at a rapid rate, generates a stretch-shortening cycle (SSC cycle) to exert explosive force, so that Type II muscle fiber can be selectively mobilized,8 contributing to the development of cross-sectional area (CSA) of muscle fiber, and increasing maximum muscle strength.9,10

This force is to operate the exercise unit voluntarily to lift the weight load as quickly as possible.11,12

In the previous study, it was reported that the mobilization of the high motor unit and the maximum firing rate speed were improved at the beginning of the exercise by analyzing the electromyography response before and after the 12-week fast contraction training.13

On the other hand, there is no study to investigate physical changes during exercise,14 so it is academic value to analyze the difference in muscle activity and exercise volume during traditional resistance exercise and ballistic resistance exercise through monitoring using analytical equipment.

Eight physically active, healthy males (mean ± SD: age: 26.21 ± 1.53 years; stature: 177.02 ± 2.11 cm; Weight: 78.12 ± 2.10 kg) and with no history of lower-limb injury in the past 12 months, were recruited to participate in this study. This study was approved by the institutional review board and conformed to the Declaration of Helsinki. All of the selected subjects were fully educated about the significance of the study, the expected benefits, the inherent risks and inconveniences, and signed a consent form that they could be stopped at any time by their will.

After the selection of subjects, the maximum muscle strength (1RM) of the shoulder press was measured two weeks before the experiment, and then the weights of 65% 1RM were measured by one week before. On the day of the experiment, the subject attached a surface electrode after performing warm-up exercises and performed maximum repetition standing shoulder press under a specified load.

Number of repetition, exercise time, and muscle activity were measured during exercise. In this study, data were compared and analyzed until 15 times were performed according to the subjects who repeated the minimum number of times.

The starting posture of standing shoulder press started at the bar at the top of the shoulder, the foot was spread with the width of the hip, and the bar was held outwards by 2-5 cm with the width of the shoulder. Push the bar up and over the head until the arms are fully extended over the shoulders. It may be necessary to tilt the head back slightly to avoid hitting the chin or face. Slowly return to the starting position following the same path used for the upward movement.

In the ballistic motion condition, the knee flexion was performed 45 degrees in the starting position, and the bar was pushed up while the knee was extended. Standing shoulder press exercise as shown in Fig. 1. 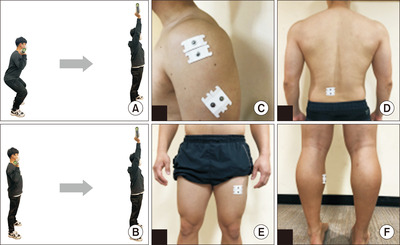 An electromyography (EMG) machine (Korea, Laxtha) was used to investigate muscle activity during exercise, and the surface electrode was attached with reference to the study of Konrad.15 In order to obtain high-quality EMG data, the hair of the outer skin layer was shaved using a razor before electrode attachment, and the skin surface was cleaned with alcohol.

Electromyography was measured in three muscles, the pectoralis major, anterior deltoid, and triceps brachii, which are the prime movers of the bench press, following the method of previous studies. When attaching the electrodes, two were attached each to the site 1 cm apart from the insertion site of the intramuscular electrode.

Telescan software (ver. 3.15, Laxtha) was used to observe muscle activity from the measured EMG raw data. To calculate the root mean square (RMS) by extracting the measured raw signal data for each exercise set, the y-axis value was set to 0 after offset control of the raw EMG signal. The range was set as 10-400 Hz for band pass FFT-filtering. After that, the mean value was used after taking the square root. Electromyographic signal analysis are as shown in Fig. 2. 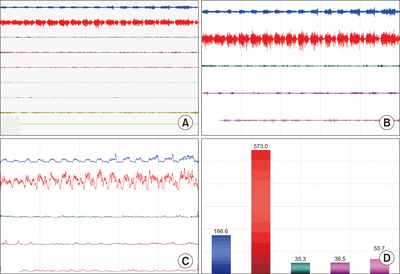 For the data measured in this experiment, the mean and standard deviation of all variables were calculated using the IBM SPSS Statistics (ver 22.0) statistical program. To verify all dependent variables according to exercise conditions, paired t-test. All statistical significance levels were set to less than α = .05.

Difference of number of repetitions

Table 1 . Difference of number of repetitions

The paired t-test for muscle activity during standing shoulder press exercise are as shown in Table 3. There was a statistically significant difference in the erector spinae ( = .002), rectus femoris ( = .001), gastrocnemius ( = .012) of activity according to ballistic movement during standing shoulder press. Difference in muscle activity are as shown in Fig. 4. 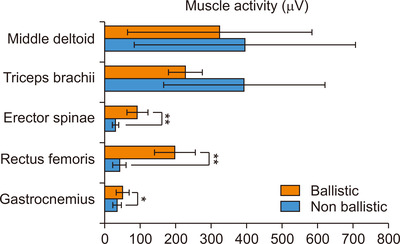 In resistance exercise, ballistic movement is also used in muscle power training to improve the power, or it is also applied as a trick action to avoid sticking points and to increase the amount of exercise in general training. In this study, the number of repetition, exercise time, and muscle activity of the exercise were analyzed to prove the actual effect of ballistic movement.

Muscle activity was not statistically significant in deltoid and triceps brachii, but was significantly higher in non-ballistic conditions. Muscle activity refers to neuromuscular activity by electrical signals transmitted to muscles,19 and increases as the recruitment of motor units increases or fatigue increases.20,21

This is because shoulder press exercise is a training method for training shoulder parts,1 and the higher muscle activity, the better the concentration of training.22 During the shoulder press exercise, deltoid generates the flexion of the glenohumeral joint to lift the humerus in the head direction, and the triceps brachii creates the extension motion of the humeroulnar joint to complete the motion of lifting the barbell above the head.23,24 Non-ballistic condition shows high muscle activity because the body segments except shoulder and elbow are fixed and weight should be pushed out only by deltoid and triceps brachii. The ballistic condition is interpreted to be relatively low burden of deltoid and triceps brachii because the whole body muscles are utilized.

On the other hand, the activity of the trunk extensor (erector spinae) and the lower extremity muscle (rectus femoris, gastrocnemius) muscle of the torso was significantly higher in the ballistic condition. This is because the pre-activation of the torso and lower extremity muscles is greater than the non-ballistic condition in preparation for the movement to be involved in the generation of force,25,26 and it is considered that the movement was made to efficiently transfer the force generated from the foot and ground to the upper body through the legs and torso to lift the bar.

The present research was supported by the research fund of Dankook University in 2021.