Abstract
Verruca (wart) is a common cutaneous disease caused by the human papillomavirus (HPV). Plantar warts are frequently associated with HPV genotypes 57, 27, 1, and 2. While some plantar warts can spontaneously regress, many patients undergo treatment with topical salicylic acid, cryotherapy, intralesional bleomycin injection, and laser therapy. Pulsed dye lasers have been used to treat verruca effectively by targeting the dilated vessels in the dermis. More recently, lasers with deeper penetration, such as the 1064-nm long-pulsed neodymium:yttriumaluminum- garnet (Nd:YAG) and the 755-nm alexandrite laser, have also been reported to be effective in the treatment of verruca. We share our experience of successfully treating recalcitrant plantar warts using longpulsed 1064-nm Nd:YAG, alone or in combination with the alexandrite laser.
Keywords: Verruca; Wart; Long-pulsed Nd:YAG; Alexandrite laser

Plantar warts are benign hyperkeratotic epidermal proliferative diseases caused by the human papillomavirus. Certain genotypes (type 1, 2, 27, 57) are more frequently associated with the plantar location than others.1 For patients whose warts fail to resolve with conventional treatments, such as topical salicylic acid, cryotherapy, or intralesional bleomycin injection, laser therapy can be an effective alternative. Ablative lasers, such as carbon dioxide lasers and erbium:yttrium-aluminum-garnet lasers, can be used to remove hyperkeratotic verruca lesions. Both lasers are absorbed by water and vaporize the infected keratinocytes.2 Non-ablative lasers are also effective for the treatment of verruca. The pulse dye laser (PDL) has long been used to treat verruca by targeting the dilated blood vessels within the dermal papillae.3 The response rate varies from 48% to 95% depending on the site of the lesions and the study design.4 More recently, lasers with longer wavelengths, such as long-pulsed 1064-nm neodymium:yttrium-aluminum-garnet (Nd:YAG) laser, have been introduced to treat verruca, with slightly higher cure rates compared to PDL.5,6 The 755-nm alexandrite laser has also been suggested to be effective for recalcitrant periungual warts.7

We have experienced two cases of multiple spreading plantar warts that failed to resolve with repeated cryotherapy and bleomycin injection but showed excellent response to long-pulsed 1064-nm Nd:YAG laser and 755-nm alexandrite laser. 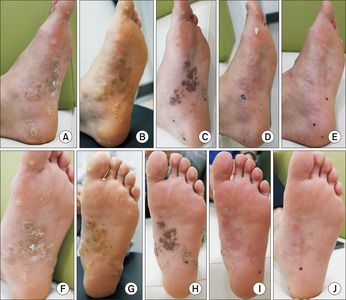 The other patient was a 27-year-old man who has had two plantar wart lesions on the right sole for more than 5 years. He had tried cryotherapy, intralesional bleomycin injections, and topical 5-FU. However, the lesions did not disappear after multiple combination therapies. Long-pulsed 1064-nm Nd:YAG plus 755-nm alexandrite was then introduced. The parameters used were the same as those used for the patient described above. One month after the first treatment, all the lesions had disappeared (Fig. 2). There was no recurrence after 3 months.

Figure 2. (A) Initial photographs of the plantar warts. (B) One month after the first treatment with the combined long-pulsed Nd:YAG and Alexandrite lasers. (C) Three months after the second laser treatment.

Topical lidocaine plus prilocaine cream was applied 20 min before laser treatment, and an instant cooling device was incorporated within the laser system. Based on the numeric pain scale, the maximum intraoperative pain was 8/10 and 7/10 in the first and second patients, respectively.

The use of lasers for the treatment of verruca is based on their ability to target the neovascularized vessels in the papillary dermis. Photothermolysis and microvascular hemorrhage occur when hemoglobin absorbs light. PDL devices with a wavelength of 585–595 nm are considered the standard non-ablative laser for the treatment of vascular lesions. Warts have shown a good response to PDL, with a cure rate ranging from 48% to 95% in previous literature.4 The long-pulsed Nd:YAG laser has a wavelength at the lower peak of oxyhemoglobin absorbance, and its penetration depth is deeper than that of the PDL. Therefore, lesions greater than 2 mm in depth may respond better to long-pulsed Nd:YAG than to PDL. In a prospective comparative study, long-pulsed Nd:YAG showed a slightly higher cure rate than PDL for plantar warts, although the difference was not statistically significant.6 In addition, Nd:YAG lasers require fewer sessions to achieve remission than PDL.2

The long-pulsed 755-nm Alexandrite laser has a stronger absorption by deoxyhemoglobin and deeper penetration than PDL. No prospective studies comparing alexandrite versus PDL or Nd:YAG laser for cutaneous warts have been conducted, but a case of recalcitrant verruca that was treated in two sessions of alexandrite laser has been reported.7

In this study, we used a dual-wavelength alexandrite and Nd:YAG laser system to treat the recalcitrant palmoplantar warts. Both wavelengths are absorbed by hemoglobin, and therefore, induce the coagulation and destruction of blood vessels. The removal of the feeder vessels then leads to necrotic changes in the virus-infected keratinocytes.

Our patients showed dramatic results in a short period of time. Due to the long pulse duration (30 msec) and high energy of the Nd:YAG laser, the patients complained of severe intraoperative pain. Additionally, pulse-stacking is required to achieve the desired end point (slight blanching on the lesion) yet pulse-stacking using 1,064 nm wavelength alone may lead to adverse events, such as bullae or burn. Photothermolysis induced an instant increase in the temperature of the wart lesions. Immediate air cooling within the laser device and additional cooling with an ice cube before and after laser irradiation helped relieve the pain. The first patient showed hemorrhagic crusts after two laser treatments, which has been previously reported as a common reaction after Nd:YAG.8

The 755-nm alexandrite laser is more selectively absorbed by the vessels and therefore requires less thermal injury to treat verruca. The combination of 755-nm alexandrite and 1064-nm Nd:YAG laser in the second patient reduced the total amount of pain, thereby improving patient compliance. Some of the visible vessels were destroyed immediately after laser irradiation, resulting in a whitish crust over the hyperkeratotic plaque.